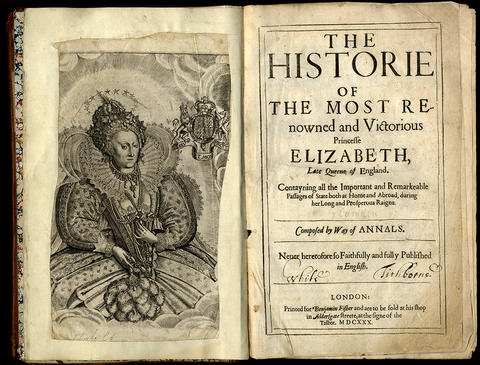 The Historie of . .Elizabeth

Son of Sampson Camden, London, citizen and painter stainer, and his first wife Elizabeth, dau. of Giles Curwen, Poulton Hall, Lancs. ; b. 2 May 1551 ; ed. Christ’s Hospital and St.Paul’s Sch. ; Magdalen Coll.Oxford, servitor 1566 ; migr. to Broadgates Hall and subsequently to Christ Church, Oxford ; BA 6 Mar 1573/4 ; adm. Inner Temple 20 Feb 1571/2, having previously been a member of Lyon’s Inn ; began travelling over England collecting antiquarian and archaeological data ; Under Master, Westminster School 1575-93, obtaining appointment through the influence of Dean Goodman ; Keeper of Chapter Library, Westminster Abbey 15 May 1587 ; Prebendary of Salisbury from 6 Feb 1588/9 (although a layman) ; Head Master, Westminster School Mar 1592/3 – Oct 1597 ; on 13 Jun 1594 was permitted to “take his diet with us, the said Dean and Chapter, sittinge at our table in our said Colledge” ; Clarencieux King of Arms from 23 Oct 1597 ; founded Camden Professorship of History, Oxford Univ., 1622 ; author, Britannia, 1586 (six subsequent editions in his lifetime), Annales, 1615-25, and other works ; his Institutio Graecae Grammaticae Compendiaria, 1595, published for the use of the School, was an epitome of the Graecae Linguae Spicilegium of Edward Grant (qv) ; it became known as the Eton Greek Grammar and passed through more than 100 editions ; see W.H.Herendeen, William Camden, A Life in Context, 2007 ; d. unm. 9 Nov 1623. Buried South Transept, Westminster Abbey. ODNB.