As part of the celebrations for the 450th Anniversary of Westminster School, a statue of Queen Elizabeth I was commissioned and unveiled by The Queen on 21st May 2010. Includes images, correspondence, press cuttings and notices about the development, assembling and unveiling of the statue.

Booklet of Hymns, Psalms and Readings used in Service, in Latin and English. Includes the 'Form of Commemoration' which lists Benefactors.

Brief given to the Elizabethan Club Committee regarding organising the Ball to celebrate the 450th Anniversary of Westminster School. 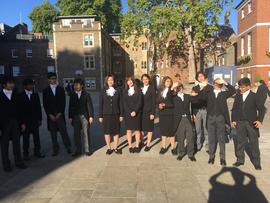 Photographic reproduction of drawing of performance of Latin Play. Created after 1857.

Production of the Latin Play

Papers relating to the arrangements for the production and performance of the Latin Play. Includes cast lists, sketches and drawings for scenery, Epilogues and Prologues spoken at performances of the play and samples of programmes and tickets for the play. Also includes lists of names and addresses of individuals to receive tickets, production notes covering all aspects of rehearsal and performance and draft seating plans and arrangements for individual performances.

Fragment of paper with handwritten cast list for production of Andria