These books catalogued with a 'BUS' prefix were at one point located in the school's Busby Library, a room commissioned by Head Master, Dr. Richard Busby, to house his substantial book collections. This incorporated some volumes which were present at the school prior to Busby's time as Head Master, such as those donated by Mildred Cecil, Lady Burghley, and the library of Busby's friend, Dr John Pell, which Busby purchased after Pell's death. The majority of the books amassed by Busby were left to the school after his death, although some titles were donated to the church he built at Willen, Buckinghamshire, where they later perished in a fire in 1946. Later additions were incorporated into this collection, often donated by Head Masters and former pupils. 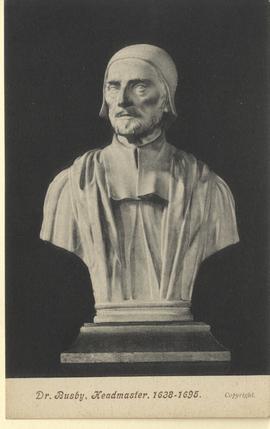 One copy annotated on reverse by R.S. Chalk, as follows:
'(Bust dated 1895-L.E.T. p39) 1918-1924
There were in my day two busts of Dr. Busby (both presumably destroyed in the Blitz)- one behind the HM’s chair Up School, the other in an oval recess in the Busby Library, above the chair occupied by the Master, in my time I.F. Smedley.
On these two busts was based the most famous of several apocryphal stories currently concerning I.F.S and the VII Form (definitely before my time!), as follows: - I.F.S. had lunched well and wined freely.
[He was in fact a man of most sober habits]
On his return to take Afternoon School, he was astounded to see two busts above his Chair (the other having been surreptitiously ‘borrowed’ from School!). On being questioned, every single member of the VII he could see but one – I.F.S must be “seeing double”! Not convinced yet, I.F.S left the room to fetch Sergt. Bowler for his testimony. As once the culprits removed the second bust, leaving one only.
On returning then with Sergeant, I.F.S. was about to ask him his opinion when he looked- and (still mystified) said instead – “Very well, -er, Sergeant- you may go!”)' 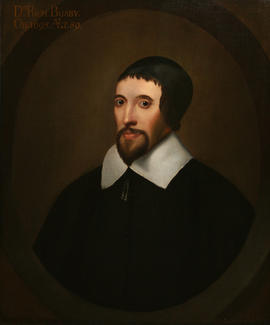 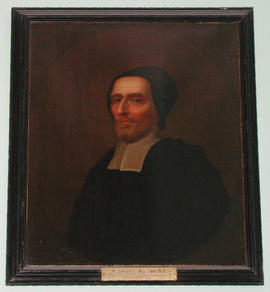 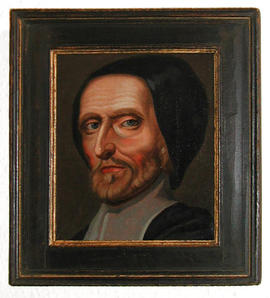 Life-size head of Busby wearing academic dress and a scull cap; he is inclined to the left.