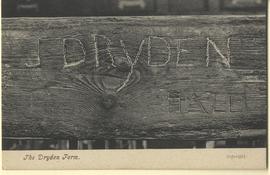 One copy annotated on reverse by R.S. Chalk, as follows:
'The ‘Dryden Form’ was kept unobtrusively somewhere behind the semicircle of seats for the Monitorial Council at the N. end of School. Few saw it there, and few cared.
It was first pointed out to my farther and myself by E.L. Fox when I appeared for my first Challenge in 1918.
No doubt (likes so much else stored Up School) it perished for ever in the Blitz.
The Form itself was exceedingly rough, worn by the seats of generations.
In the dim light of School the letters could barely be made out (It may be noticed John Brown has traced them round in chalk for this photograph). To my mind it is open to question whether they were carved by the Poet or by his son of the same name (K.S. 1682-5). Nearby was cut in huge, deep letters ‘A.SLADE’. We all knew the tradition that it had cost him 500 lines for each letter (see L.E. Tanner, p32)'