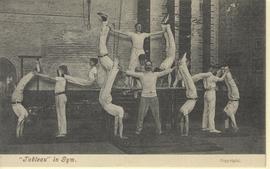 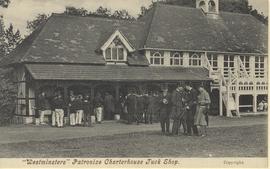 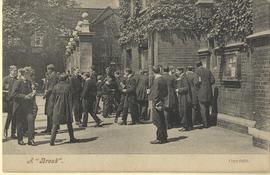 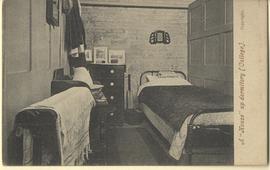 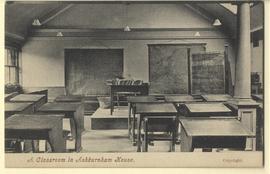 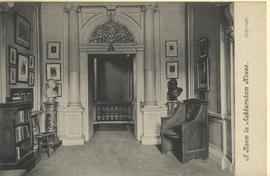 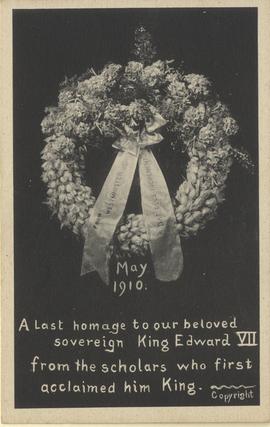 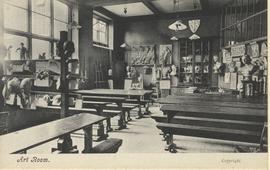 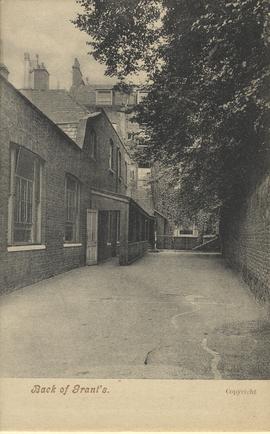 One copy annotated on reverse by R.S. Chalk, as follows:
'Back of Grant’s 1918-24
A portion of the School precincts I naturally never once set eyes on during all those years. Except for Monitors (on official duty) no member of any one of the five Houses was allowed to set foot inside another.
This no doubt Grant’s Yard (somewhat more specious than its counterpart up RR next door). The windows are protected by wire-mesh because of the ‘Yard Game’ played there, the counterpart of RR Yard Game. This was a kind of miniature football played four-or-five-a side with a rubber ball about 4 inches in diameter. A very fast game (and too rough for me personally). If the ball was ‘popped’ on an iron spike or (more likely) ‘skied’ into GG Yard next door, it meant an outlay of 6d, on another, if available. Ee would call, “Thank-you ball Grant’s!!” Sometimes our ball would come back, but not often. (GG balls were never skied into RR Yard!)'

One copy annotated on reverse by R.S. Chalk, as follows:
'Memories (R.S.C.) 1922-1924
I sat in Busby Library as a member of VII for 6 Terms ; from Play 1922 to Election 1923 my seat was in the far left-hand corner of this picture (a privilege to have chairs, no longer desks or forms!); from Play 1923-Election 1924 as First Classic (a little revived at that time) I chose a Chair at the end of the table by the window (we chose in order of seniority).
We sat at the feet of I.F. Smedley (never ‘Snogger’ to his Form), a profound Classical Scholar, complete master of his subject, and a gentleman. He had (I believe) been Master of the VII since 1898. He was also a consummate master of English and a purist (Eg.- ‘Baptized’ not ‘baptised’, because derived from Greek root; conversely, ‘Authorised’, never ‘authorized’). We were taken in some subjects by the HM –not so great a scholar, but with the priceless gifts of enthusiasm, zest and appreciation.
Our order for 1923-4 was determined by the result of Higher Cert. in July 1923. There were no promotions from CVI in 1923 so 13 of us continued for a second year in VII. Not caring to risk Election, 4-5 of us gained Open Scholarships.'