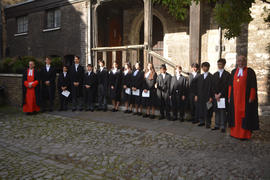 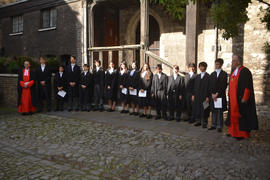 Cast photograph of Phormio. Names of individuals are given below the photograph.

Cast of Latin Play in costume. Individuals are identified in caption.

Cast of Andria on stage in costume.

Cast in costume on stage.

Cast on stage in costume for epilogue. Pasted to reverse is photograph of cast in classical costume for the same play.

Cast in costume on stage with Rev. A. Raynor. Individual cast members are identified in the caption.