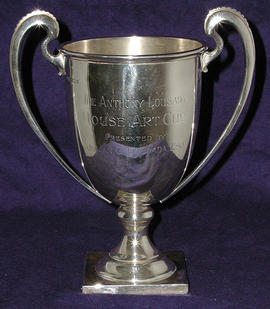 No strong impulse to go to Westminster. Serendipity rather than conscious plan. Just wanted to leave his school in Wimbledon. [2:07] Sees teaching as a job rather than a career. Accommodation at school meant he had a better lifestyle than he would otherwise have been able to afford, so unable to leave Westminster. [3:50] Enjoyed all his roles in the school. Attempts to prevent him from being Head of English. Without an SMT, it was easier for elderly teachers to put pressure on Head Masters than it is now. [7:05] Ashburnham House Master. Great job. Its location meant it was difficult to get people over there. Supervision of the house had not previously been very thorough. [8:31] Grant’s was fun but very tiring, since it was a boarding house and therefore very long hours. This improved after another boarding house master had a nervous breakdown. [10:18] Far greater parental involvement than before. Can make it more difficult for the children. [12:17] Westminster looks after children better than it used to. More involvement and pastoral support from the House Master now. [13:26] Change in the texts studied. Othello and Lolita now no longer on the syllabus. [18:33] Teachers’ tendency to perform. Used to being the centre of attention. [19:13] Big figures in the Common Room. Ernest Sanger, an Austrian Jew who left Europe before the outbreak of war. Should have been an academic. Theo Zinn, an enormous influence. [21:47] Inspirational teachers can often be the bully as well. [22:29] Common Room 30 years ago. All men apart from one teacher. Smoking and conspiring. An example of plotting against the Head Master, John Rae. [24:21] Improvements to Common Room photocopying during his time as Common Room President. Also finding a helpful Common Room secretary. [27:47] Computers have made some tasks easier but have created more work. Enjoyed teaching in different classrooms when there was more pressure for space. [31:14] Introduction of girls to the school. Frances Holland School didn’t have laboratories, so girls came for the science lessons. It began as an informal arrangement. [32:57] The introduction of girls meant there was more socialising in Yard. House differences became less important. [35:24] Much harder to get into Oxbridge than it used to be. [38:21] The importance of straightforward criticism. [41:24] Theory of the developing intellect. [42:01] Negative effects of child protection policies. More cumbersome now and instructs children to distrust all adults. Morally offensive. [45:20] Miss the 7th term for Oxbridge, when the most difficult topics were tackled, but otherwise the intellectual element of teaching is just as challenging. [46:49] Teachers that he particularly remembers. Russell Dudley-Smith, a polymath. Richard Jacobs, an inspiration as an English teacher. [48:58] The predominance of Maths, the only subject with no moral content. On whether this will continue. [51:43] Advice to teachers joining Westminster. Advice to pupils at Westminster. [54:51] The virtues of conformity or independent thinking. [55:41] Will miss having an audience when he leaves. [56:50] An anecdote about a pupil’s late prep. [58:22] Unsure what he will do after Westminster. Perhaps writing. [1:00:19] Preventing the stripper-gram from accosting John Rae.

A pale sphere on a dark blue background, created in mixed media using plastic sheeting burnt away to produced a textured surface. 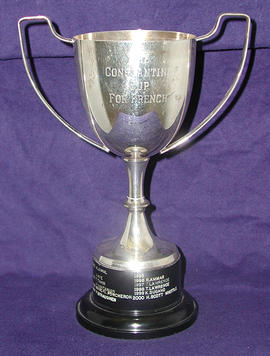 The Constantine Cup for French