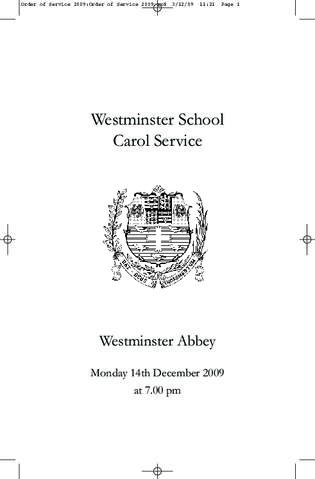 Order of Service for the 2009 Westminster School Carol Service

Barnard & Westwood was founded by Albert Reginald Barnard, a First World War survivor who suffered injuries during the fighting which prevented him from working underground in his previous trade as a hotel printer. Faced with the loss of his livelihood, Albert approached his Aunt, Miss Westwood, for financial backing. A schoolteacher and noted Suffragette who contributed numerous articles to the press. Miss Westwood lent Albert the money he needed and Barnard & Westwood was born,
In recognition of producing consistent high-quality work for the Royal Household at Buckingham Palace, the company was granted a Royal Warrant by appointment to Her Majesty The Queen for Printing and Bookbinding.

Order of Service for the 2009 Westminster School Carol Service, held in Westminster Abbey on December 14th.