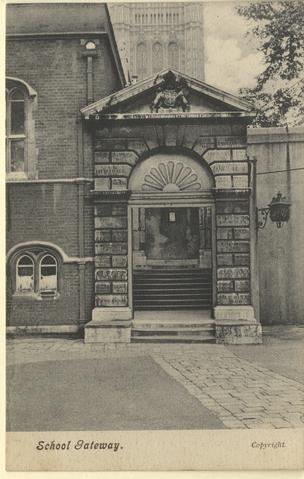 One copy is annotated on reverse by R.S.C as follows:
'The focal point of Yard, which impressed me deeply when I first saw it (as a small boy in 1915). I wondered even then how boys could carve their names on it so expertly. (Later Mr. Green carved my name in College on wood for (I believe) the sum of 5/-).
The centre-piece of many a School compilation. (A tragedy the present ‘Eliza’ has no use for it).
In my day it was wrongly known by Town Boys in Under School as the ‘Up School Gateway’ (save the mark!). A new Junior KS. of my Election in his word-test called its designer ‘Jingo Jones’.
To the left is Sergeant’s Office (a ‘sanctum sanctorum’ where were compiled lists of those due for ‘Up School’ or Penal Drill), with the VI Form Room above it. To the right, in my day a convenient but ugly Fives Court, used (exclusively, I think) by K.SS. It was a vast improvement aesthetically when this was removed some years later and the vista opened into (hitherto unseen) College Gardens.'