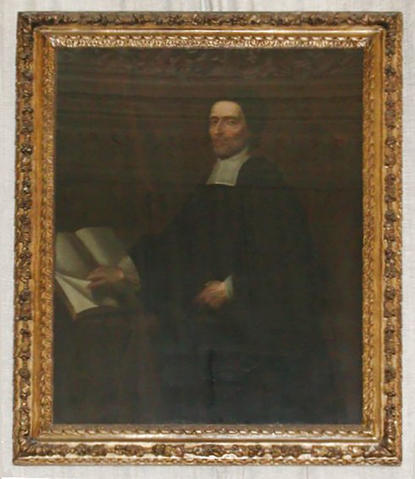 Extract from The Elizabethan (1966):
"Despite the number of portraits of him in the possession of the School, none is original: they are all taken from an engraving of a lost drawing by Henry Tilson, who committed suicide soon after drawing Busby's corpse. Much of Busby's reputation for severity seems to have permeated his even these copies, for the small head which hangs in Busby's and the half-length portrait in No. 17 show him with almost unbelievably harsh and unsympathetic features, surmounted inevitably by the scull-cap, which certainly does nothing to alleviate the impression of total austerity. In the large version, however, a moderately distinguished painting illustrated in Sargeaunt's "Annals of Westminster School", the artist seems to have felt less animosity towards him, and the famous Head Master looks down almost leniently from his frame. Only two busts of Busby are prominently displayed in the school; and these, a copy by Lee in the Busby Library and a plaster cast in the Art Room, naturally enough give a somewhat hard impression of him."

Three-quarter length portrait of Busby standing, wearing academic robes and a scull cap; his body and head are inclined to the left of the painting; to the bottom-left is a table covered with a cloth, upon which is an open book; Busby has almost turned a page with his right hand.